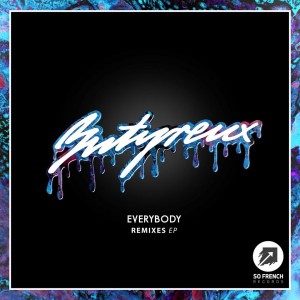 This year So French Records team started early to bring us musical joy, with an amazing Winter Time Compilation, one month after the first release, the So French team launch the brand new Butyreux release, intitled ‘Everybody The Remixes Ep‘…
It’s been a while that we did not have news about the italian producer, Butyreux, one So French active producer, and it is yesterday that his coming back happened, during his birthday!
Everybody Remixes Ep, is a 5 hot French House remixes release introducing talented artists as Kovary, Anthony Atcherley, Camaro Kids and Mac Stanton. Each artists who joined this project was given the choice to choose his favorite song extracted from last Butyreux Ep ‘Everybody Ep‘, to be remixed in the new release.
The result is brillant!
Important to add that for the event, Butyreux did his own remix of one of his original song, ‘Everybody‘,
bringing in the new remix, an 90′ old school touch!
Everybody Remixes Ep is out yesterday for exclusive on So French Records and available on Beatport for exclusive!